While undergoing chemotherapy I was given the option to apply for a special day through the Willow Foundation. It gives you the choice of having a special day funded through the charity. I wasn’t too sure what I wanted to do at first so I browsed what others had done.

There were a lot of places to go over the UK however I only really wanted to do archery. So I went to the closest location that did archery which was Sherwood forest in Nottingham. Extra geek points for it being the home of Robin Hood as well.

I went at the end of April, Monday through to Friday. Myself and my partner would be staying in the golden oak which was a two bedroom cabin that sleeps four. The cabin also comes with a hot tub and a gas barbecue.

Probably the most upsetting thing was that I didn’t bring a HDMI cable and there is a slot that I could have used to hook my laptop to the TV. Instead we used the chrome cast and the movie selection that comes in the entertainment pack.

We spent the first two days watching TV, eating food, and spending time in the hot tub. We ordered food from the retreat, which is your central hub for buying food and booking activities, which was two pizzas on the first day. On the second we tried out the barbecue, which was a good call as that was the warmest day, While gas barbecues are easier to deal with you don’t get the classic smokey flavour from coal or woods ones.

The hot tub was great. The right level of heat but not too hot. My partner did want it to be a bit warmer though. We stayed in it until the sun set on the first two days. It was very nice getting to watch bats fly over head and the birds resting in the trees.

There was a lot of wildlife around, being in a forest and all that. Only mammal we saw that wasn’t someone’s dog were squirrels. There was a large variety of birds though, there were wood pigeons, coal tits, black birds, and even spotted wood peckers. I’m not sure if it was a lesser or a greater spotted woodpecker though.

We also signed up for some events. On Wednesday, I signed up for a birds of prey experience, while my partner do crossbow shooting. They were in a small group of just three people and they said the hardest part was working the safety on the crossbow.

I was also in a group of three as well and we had two birds on display. They were both bay-coloured hawks or Harris hawks, one male and one female. We spent some time discussing what is meant by a bird of prey and also the physiology of the birds. That included their grip strength, eye sight and their gender dimorphism.

It was really interesting learning about the different quirks of the birds he had. The female, who was unnamed as he’d only had her a few weeks, would only fly to a nearby post. Throughout the session she actually went to the roof of the play area which was an improvement for her that made the instructor quite happy.

Here she is flying over from the play park.

We got to fly her to our arm after putting on the falconry glove and having a small bit of quail or cockerel chick put on. He explained that she was mantling when she ate which was a habit she had picked up from a previous owner. This is when they cover their food with their wings to hide it from potential thieves.

Here she is mantling.

After we flew her for a bit he put her away and we changed to Cyril, his male hawk. He was smaller than the female but was older and more experienced. The difference was remarkable in how they flew. Cyril would fly up into the trees and do fly-byes over us.

The next day it was just me and my partner in a standard archery session together. We were using recurve bows in the american-indian style I believe he said. It was really great because we did lots of competitions against each other. They made you work your aim as opposed to just learning where we had to shoot to hit the bullseye.

I came out with a few marks from the bowstring hitting my arm due to me not bending my elbow enough. I also lost the overall competition, I won four games and my partner won six. It would be something I’d be interested in doing again although I don’t really have the room in my home in Manchester. So I would have to look at classes elsewhere. 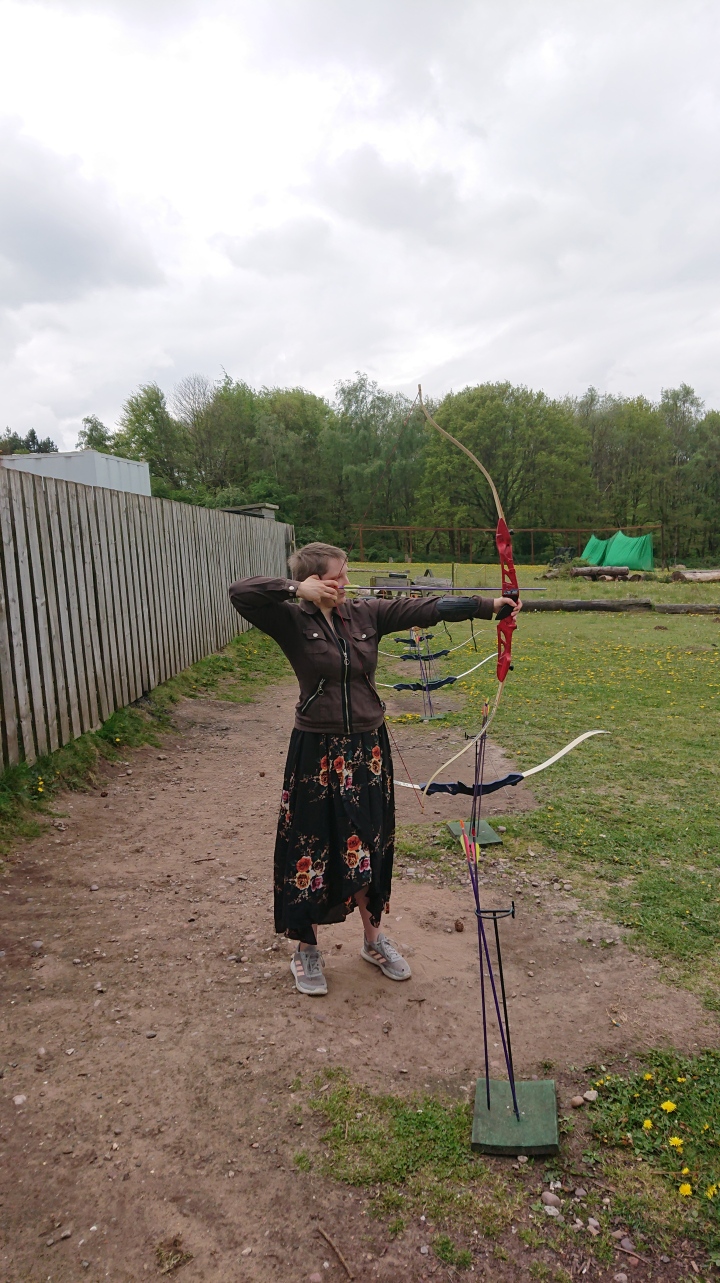 We were pretty lucky as the start of the day was cold and windy but it turned into torrential rain and hail later on. So, we decided to give the hot tub a miss and instead stayed in with the log burner, watching batman ninja. We brought microwave popcorn which was a good shout, because it took up less space in out suitcase.

The final day was just spent tidying the place ready for check-out. That wasn’t hard as we hadn’t really made a mess. Although I was confused by having food waste bags but no food waste bin that could be seen. I’m assuming we cleaned it well enough as we haven’t heard anything off of them.

It was a good holiday and definitely a great break before I had to get back into full-time work. I’m not sure if I’d go again but my partner said they would. I think I’m more a holiday abroad kind of person, and that is what I’ll be covering in my next blog post.